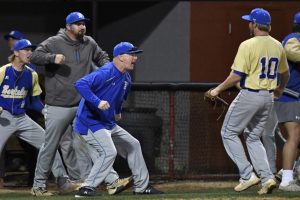 The All-Region 7-AAAAA baseball team has been released and region champion Berkeley High School leads the way with both of the superlative selections.

Berkeley pitcher Jeffrey Zeigler was selected player of the year and Stags coach Landy Cox the coach of the year. Zeigler, a junior, was 8-0 from the bump.

Cox guided the Stags to the region crown after being projected to finish as low as fifth.