COLUMBIA – After the state championship track and field meet every spring, there are always plenty stories going around about should have, could have and would have. 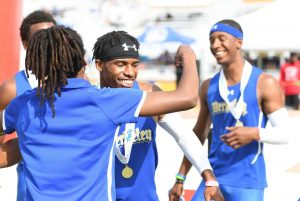 Then, there’s the tale spun by Berkeley’s 4 x 100 meter relay team on Saturday in the Class 5A championship meet at Spring Valley High School.

Considered the state’s premier foursome essentially all season, Tre Morrison, DJ Chisolm, Antwan Coats and Jeremiah Mack turned a 41.14 to blister the opposition on the way to state glory. They finished more than three-tenths of a second ahead of runner-up Sumter and over half a second in front of third-place Westside.

They were the No. 1 seed coming out of the state qualifier and made it look easy when it mattered most.

“Seeing these guys every day, training with them and being motivated by the way they work – I motivated them sometimes too – we challenged each other,” Morrison said. “To get this ring is great.”

Asked how they were able to put up their best time of the season in the last race of the spring, all four runners pointed to coach Leanna Morrison.

She swiftly deflected the credit, though, expressing that the group simply set a goal and worked to achieve it. 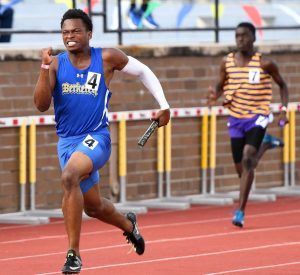 The Stags tweaked the distances between their exchanges to accommodate soreness and how they felt on Saturday morning when they got to the track.

By the time Mack ended up with the baton for the final leg, he was set up for a triumphant trip down the home stretch. All he had to do was not drop the baton.

“I knew I had a big responsibility to bring it home,” Mack said. “All my teammates had already done their job.”

Morrison led off and handed off to Chisolm, the fastest in the group, for the second leg. Antwan Coats grabbed the baton from Chisolm.

“It went very smooth,” Chisolm said. “Some of us had tweaks in our legs and stuff but we just overcame that and ran a perfect race.”

The relay gold made Chisolm a two-time winner on the weekend and helped erase memories of close calls in football and basketball.

On Friday, Chisolm won the long jump with a mark of 26 feet, 6.75 inches, over four inches further than runner-up Ja’Kheem Heyward of Sumter.

Morrison was also a starter in football for the Stags. They lost out in the third round of the playoffs.

“Playing other sports and having aspirations to win state championships in those sports and not being able to fulfill those dreams and then coming down here in the last sport I’ll ever do in high school and winning is just special,” Morrison said.

Like Morrison and Chisolm, Coats and Mack were seniors down to their final moments in a Stags uniform. Coats said he expected the race to go well.

“We were determined to win this race,” Coats said.