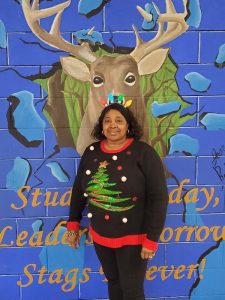 Marrie Dingle was nominated by her colleague, Charles Harrison.

“I moved my family to Moncks Corner, SC about 18 years ago to start teaching and coaching at Berkeley High School,” said Harrison. “As a head coach, it was important to get to know the school and community members who will assist you with fitting in to the culture. That is where I start with Ms. Dingle.”

“At the time, Ms. Dingle was the secretary for an assistant principal, but she is so much more than that,” said Harrison. “Every time I went into her office, there were always kids in there talking to her.  It never dawned on me that every student migrated to her for personal, social, and school help. Ms. Dingle grew up in Moncks Corner, so she had a vested interest in all the kids at the school. These are just a few examples from my relationship with her.”

“One of the most important aspects in coaching is to have someone you can count on and rely on to make the game go smoothly. Ms. Dingle filmed every game of mine at Berkeley High School during the 16 years I was there, both home and away games,” said Harrison. “She ran a concession stand at both football and basketball games to make sure our booster clubs were provided for. She also arranged meals for my teams from local churches and community members who understood how important it was for our kids to be properly nourished.”

Unfortunately, there have been a few BHS athletes who passed away over the years. Ms. Dingle arranged and orchestrated each funeral. She helped provide each athlete’s family with a proper funeral in the auditorium at BHS.

“I recognized her influence one January evening, when we traveled to an away trip for a basketball game at Beaufort, SC,” said Harrison. “Ms. Dingle always traveled on the bus in her usual front seat. One of the girls’ basketball players had a untimely complication, and our kids found out on the bus on the way home of her passing.  Ms. Dingle held those kids together in what was a very difficult situation. She arranged for the parents to meet the girls and boys players in Charleston to get them to the hospital.”

Outside of sports, Ms. Dingle brought more than one nephew down to her house from out of state to help raise them so they could graduate from High School. She voluteered at the local Presbyterian church and helped with daycare for parents while they were in Church.

“She actually kept my daughter in law there for over 20 years,” said Harrison.

Ms. Dingle assists in running the summer camp at Berkeley High School. This camp brings former NFL athletes Bruce and Andre Ellington back to Berkeley High School each summer, along with other NFL players, to hold a youth camp and a health fair for the community.  Over 2000 youth attend each year.

Additionally, Ms. Dingle used her office for kids to come in and study for exams and SAT prep.

“Ms. Dingle is one of the greatest, most giving individuals to a school and her community that I have ever know in my 35 years of education,” said Harrison. “It is with pride and honor that I know her as a colleague and friend.