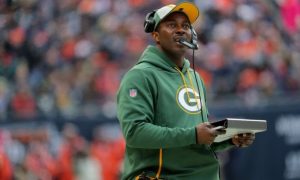 A paper route kept bringing Maurice Drayton along to the same destination.

Past the homes of former players, not far from the William McKinley Presidential Library and, finally, inevitably to the Pro Football Hall of Fame and the formerly named Fawcett Stadium in the heart of Canton, Ohio.

There, Drayton got an introduction to the National Football League.

There, along with a faith-based, singular vision is why today, Drayton is a five-year NFL coaching veteran in his third year as assistant special teams coach for the venerable Green Bay Packers.

“When we moved to Canton, Ohio, that’s when that flicker turned into a flame,” Drayton told FootballScoop. “I was there from eighth grade through 11th grade, and anything dealing with the Hall of Fame, I was there like a sponge. I would hang out at all the festivities.

“I remember I walked up to Tom Jackson, I’m just a little runt, and shook his hand and said, ‘You don’t know me, but you’re going to be talking about me one day.’ Looking through the fence into old Fawcett Stadium, Darrell Green threw me a chin strap. That was my position, I had always wanted to meet Darrell Green. Just little things like that.”

It is in the rote details in which Drayton separates himself as a coach, even at the professional level. Denver Broncos special teams coach Tom McMahon remembers Drayton’s approach distinguishing Drayton from other young coaches when their paths first were crossing in Atlanta.

“The biggest thing I saw from him is his dedication and the way he could teach the game,” McMahon, the Broncos’ third-year special teams coach who worked with Drayton in both Atlanta and Indianapolis, told FootballScoop. “Great teachers make you see it.

“There are people that teach it and I think the word conceive is lot more important than believe. Because if you can conceive, see is right there in the word. I thought that right away about Maurice, from the first time with him in Atlanta. The biggest thing I saw from him is how easily guys can see what he’s teaching. They can see it.”

Drayton’s seen his path in coaching for decades, even if it’s been a meandering journey from growing up in Moncks Corner, South Carolina, West Virginia, Ohio and back to South Carolina before playing and initiating his career in the Palmetto State at The Citadel.

Drayton’s father, Sandy, is a former U.S. Marine with service during the Vietnam War and a long-distinguished elder in the African Methodist Episcopalian Church. He remembers Maurice first getting a reprieve to get his playing career started – their Charleston, W. Va., league switched games from Sundays at noon to 3 p.m., allowing Drayton to compete after church – and then taking root in the shadows of the Hall of Fame at McKinley High School, where Maurice’s coach was Thom McDaniels – father of current Patriots offensive coordinator and former Drayton teammate at McKinley High School, Josh McDaniels.

“I think it really impacted him greatly when we did move to Canton, to be there in the city that’s the home of the Hall of Fame,” said Sandy Drayton, Presiding Elder for the Georgetown District of the A.M.E. Church and assistant to the presiding bishop of South Carolina. “There were one or two people at our church who were in charge of or a part of the Hall of Fame meals, which gave me an opportunity to gather with them for prayer and meals, and it gave Maurice an opportunity to meet players and former players, some owners of the professional ranks. I think also on his paper route, there were a few people who were former players, which inspired him even more.”

Hearkening to those early inspirations, Drayton carries with him an approach with which he coaches, lives, works.

“My personal motto is: Lifting as I climb,” Drayton said. “Listen, hey, we’re never going to rest. We’re going to keep climbing to the top. And we’re going to bring the next man along with us.

“Perseverance. Things will get rough, get hard. We’ve got to keep persevering. It started in the home with my mom and dad. My dad always preached the four cardinal principles of manhood: A sense of responsibility, standing on your own two feet. And he always talked about scholarship, the need be in the books, get these grades, not cut corners. And uplift others. We’re always going to reach back, help people out, give of ourselves. The bible says give 10%, but my dad, he gave a great percent of himself to the community and other people.”

This approach is true of Drayton’s entire career – including his playing days at The Citadel during which his initial status was that of walk-on player and initial start in coaching as a graduate assistant at his alma mater.

Overcoming five surgeries during his playing days. Hand-splicing old film from both Beta and VHS tapes. Living at home while serving in his G.A. role.

Refusing to settle for ordinary.

Even from afar, McMahon still sees in Drayton that same approach.

“I think No. 1 is his relationships with other coaches,” McMahon said. “Other coaches saw right away how special he was. Coach (Chuck) Pagano saw it in him. All offensive and defensive staff, throughout our organization, the whole building, could see it even from a scouting perspective.

“He did a great job of evaluating talent. He didn’t push. Every single point that he makes about something or somebody is verified on video. The No. 1 trait he has is truth. Truth is life. So what he does is he presents truth. It’s not because this kid’s from Alabama or Citadel or wherever. It’s a production league.”

Drayton works to keep producing for the support he still feels from McMahon, Pagano, his family and other influences.

“There’s several stages to this, but I have to give a lot of credit to Tom McMahon and Chuck Pagano,” Drayton said of his two former bosses with the Colts. “They believed in me when I didn’t necessarily believe in myself. As far as pushing me and giving me that opportunity. Coach McMahon was shaping me, molding me, preparing me.

“The sky is the limit. I’m ready for anything that may come before me.”

Yes, that includes any potential opportunity to run his own program. Drayton wants to meet that challenge head-on, same as his paper route.

“I think everything starts with relationships and communication. Our head coach (Matt LaFleur) does a really good job of allowing us to be ourselves. And we approach and coach these guys from that standpoint, be yourself. We’re not going to micromanage you; we’re going to help you go out there and do it, find a way to get it done. I think my skill-set right now is blossoming, and being a teams guy, I have my hands on the whole team, everybody except the quarterbacks of course. We’ve built relationships and bonds. The locker room that’s the tightest is one to work to achieve the most.”