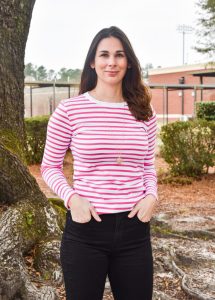 Whether it is enjoying a virtual social hour or learning to make a green smoothie, Caggiano’s team works to prepare its students for life after high school, while incorporating fun activities along the way.

Caggiano is dyslexic, and can recall what it was like growing up in special education programs – and how much those teachers meant to her.

“Without them I probably wouldn’t have gone as far as I did,” she said.

Caggiano is originally from New Jersey but came to South Carolina to attend the College of Charleston. She received her undergraduate degree in business administration, and then she went back to school to get her Master’s degree in special education.

She initially thought she was going to teach students with learning disabilities but actually fell in love with teaching students with intellectual disabilities. When her students graduate, they will earn a certificate of attendance, and until then they work on everyday life skills: doing laundry, cleaning dishes, getting a job on their own, and more.

“It’s definitely a team effort with everybody,” Caggiano said.

The team does different activities with their students to help them achieve their goals, whether it is helping the children get internships at Goodwill or taking them on weekly shopping trips to Walmart.

They also do a cooking production every Thursday, and the class is in process of starting its own cooking show. Principal Steven Steele has helped purchase equipment for the program. Half of the class includes blended distance learning students, so the team is trying to figure out how to incorporate both traditional and BDL students with this new initiative.

Caggiano’s hope is to have people from the community participate in leading a cooking lesson while talking to the students about what they do for a living.

The idea originated during quarantine, when her students celebrated National Green Smoothie Day, and Caggiano showed her students how to make one.

“They thought it was so gross – ‘Who would eat a green smoothie?’” she said, adding that they ended up loving it. “We joke because we’re trying to make it a real cooking show, and the kids heard us talking and they were like, ‘Oh, let’s do it, we want a cooking show.’ So it kind of took off from there.”

Now her class is really excited about it.

“We want to definitely incorporate people in the community so they can talk about what they do, as well as just everyday life skills,” Caggiano said.

Caggiano’s class does a lot with Unified P.E., which is part of Special Olympics. Her students normally host a big March Madness event every year; last year they planned to do a big basketball game with Hanahan High. They also previously planned a big kickball event at the Riverdogs stadium downtown with other schools in the district – the event was going to include both special and general education students.

Such events are ones Caggiano hopes to bring back after the pandemic.

“That’s why we came up with the cooking show because we love to be involved. We love to be doing things,” she said.

Caggiano said she loves seeing her students using their skills in real-life settings; the goal is to help them feel confident and accomplish those everyday tasks that others may take for granted.

“I think our biggest focus for our program is really pushing that business aspect with the job skills,” Caggiano said.

Her favorite thing about Berkeley High is the support the school has with the community and the administration, and the overall school spirit.

“Everybody (has) that Berkeley spirit,” she said, adding, “It’s just such a camaraderie among the whole school. We don’t feel separated from anybody, we feel like we’re one big family.”