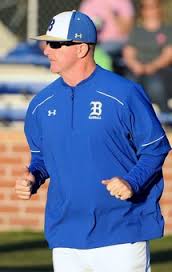 It is the mantra everywhere at Jim Bradley Field: The Berkeley Way.

The Berkeley Way is the blueprint that is becoming championship Stags baseball.

If “The Berkeley Way” is the blueprint for a championship program, then Coach Landy Cox is its architect.

It was announced that Cox had been named 2014 Region 8AAA Coach of the Year.

Cox took the plaque, looked at it and handed it to his wife to put in his satchel.

“The award is nice and I’m honored, but I’m not here for things like that,” he said. “I’m here to win baseball games for these kids and Berkeley High School. That’s what is important to me.

Cox does indeed win games. In fact, quite a few since returning to Berkeley five years ago.

When Cox sang the praises of his six-year starting catcher Kyle Garrick, he let slip a surprising secret about himself.

“Did you know Kyle Garrick has played a part in 93 wins in his high school career? It’s amazing. He has helped this baseball team with 93 wins.”

What Cox let slip is that he’d been at the helm of the Stags’ baseball program for the second time this decade, taking over for Shane Todd in 2009 to guide Berkeley to a 13-10 mark. Add those 13 wins to Garrick’s 93 and Cox has 103 wins since rejoining the Stags.

While a milestone to go with his 178 career wins, Cox isn’t concerned with numbers.

“I didn’t know where I was as far as wins and losses go,” he said. “I don’t keep track of those. Honestly, once the win is in the scorebook I’m done with that game and moving on to the next game.”

Take the James Island win, probably the biggest Berkeley win since the Stags edged Cane Bay 1-0 to win the 2012 District 7 championship. While Cox knew that win may have been the next to last nail in the Region 8AAA coffin, there was still three games left to play.

“People came up to me and said, ‘great win, great win’ and I really hadn’t given it much thought since we scored the winning run. It’s all about preparing for the next game. That’s how we think here.

“That’s how my players play.”

Officially, for those who do keep track of numbers Cox stands at 178 wins and 99 losses in a career that dates back to the new millennium. That record includes two stints at Berkeley, two years at South Florence and a year in North Carolina.

Since returning to Berkeley after Todd left for Cane Bay, Cox took a mediocre Stags baseball program and turned it into one that wins championships. In the last three seasons the Stags have won a District VII championship (2012), and a pair of Region 8AAA championships, (2013 and 2014).

For you stat geeks out there, after doing the math, the Stags have played at a .682 winning percentage since 2009.

That is the definition of championship baseball.

“Baseball is a very simple game,” Cox said. “You do three things, you hit it, you catch it when it’s hit and you throw it where it’s supposed to go. If you do all three of those things, you will win the majority of your baseball games.”

At practice, “we don’t ‘shag up’ here,” Cox said. “That is not the Berkeley way. We play everything as if it were live.”

Cox said his players from seniors down to JV and B team players all play with the same philosophy in mind — “Find a way.”

“You can’t just flip the switch at game time and turn on the burners. You have to play that way every play, every game, every practice until laying out to catch that line drive is second nature, a habit. That’s why here at Berkeley you never see us ‘shagging up’ in practice.”

Cox doesn’t ask his players to do anything he wouldn’t do himself. He wears his heart on his sleeve during baseball games, and lives and dies with every pitch, and after a win, he deflects the praise to first his players, and second, his assistant coaches.

“I have the best assistant coaches any coach can ask for in Con Salisbury, Blake Culbertson and Dwayne Kitts. They know baseball and they know how to win a baseball game.”

Whatever magic Cox has working for him is the product of hard work.

“It’s what makes Berkeley baseball the best in Berkeley County.

“We want to give fans a good product for their $7 investment to come watch us play,” Cox said. “We want to put a good team on the field for our fans because they’re our family. They have entrusted me with their kids, and while I ride them hard, they know in the long run it’s better for their kids. The Berkeley Way makes them better baseball players and better young men in the long run.”

Given the Stags’ record over the last five years, you can’t argue with that.